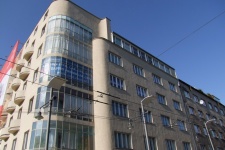 The building was built between 1936 and 1937 for lawyer Antoni Ogończyk-Bloch and architect Leon Mazalon who also was the co-author of the design (together with Stefan Koziński). This is one of the most original architectonic compositions of the interwar period, not only in Gdynia. The authors were inspired by the expressionist buildings by Amsterdam school representatives, however, the difference was that instead of a brick façade, they designed a bright one which reflects light.
A rounded and glazed corner part meant for the so called winter gardens gives the tenement house more modernity and prestige. The distinctive shape of the building emphasized by a stylistic "es" and wide southern facade with characteristic rows of "waving" balconies as if glued to the colourful plaster, is full of movement and chiaroscuro.