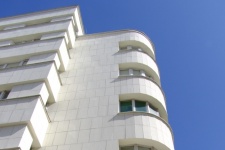 This luxurious corner house, which was built in 1936, effectively combines cubic forms with dynamic ones: rounded corner part adjoins a cubic main body and together they form an asymmetrical mass. Belt-shaped elevation, thanks to the bright colour of the facade covered with lime tiles and its corner location wonderfully attracts light. The bright facades used to contrast with the glazed ground floor – this gave the impression that the building was not connected with the ground and was sailing… The Orłowski Family, being citizens of the USA, had to obtain a special consent from the Council of Ministers to buy a plot of land where they wanted to build the tenement house. The building became a symbol of growing ambitions of residents of Gdynia: it exceeded the initially allowed height of 5 storeys, while its ground floor housed a modern and luxurious department store called "Bon Marche" – its opening was widely discussed among residents of Gdynia. After the war it was replaced by International Book and Press Club, today it still houses EMPiK (where you can buy books, international press and media products).