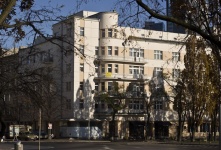 One of the first modernist tenement houses which was built in stages between 1928 and 1937 on a grand scale. It is considered to be one of the best modernist buildings of the 20's in terms of the style. Tadeusz Jędrzejewsk designed it in the early functionalism style which combined cubic forms with aerodynamic ones. It was the first time when distinct references to ships: recessed, offset corner part higher by one storey which neighbours a cylindrical form referring to captain's bridge, emphasised with metal balustrades of balconies and darker plaster, were used. Formerly, ground floor of the building housed shops and a cinema called "Polonia" (after the war – Goplana"). Today it houses a restaurant called "Trafik".